It’s official: women are beginning to take back the beauty industry. This may sound crazy because so many of us assume that the business is owned by females, but when you look at some of the top investors, founders and CEOs, men are often still in the majority. CEOs of L’Oreal, Revlon and Estée Lauder are all men, and even tampon companies are largely ran by men, Huffpost discovered in 2014. The publication, which partnered with Catalyst, uncovered the lack of female executives at the very top, finding the higher up you get in beauty business, the less women there actually are. Wouldn’t it be great if there was a bit more of a balance, especially when you consider consumers of these brands are overwhelmingly female?

But one thing that is refreshing to see is the number of female-founded, modern, digitally-minded beauty brands finally at the forefront of the industry right now. While we still have a long way to go, this is still a positive, progressive step – and one that figures such as Jen Atkin have recognised (see her recent Instagram post below). Here are 7 women who founded their beauty brands who truly inspire me… 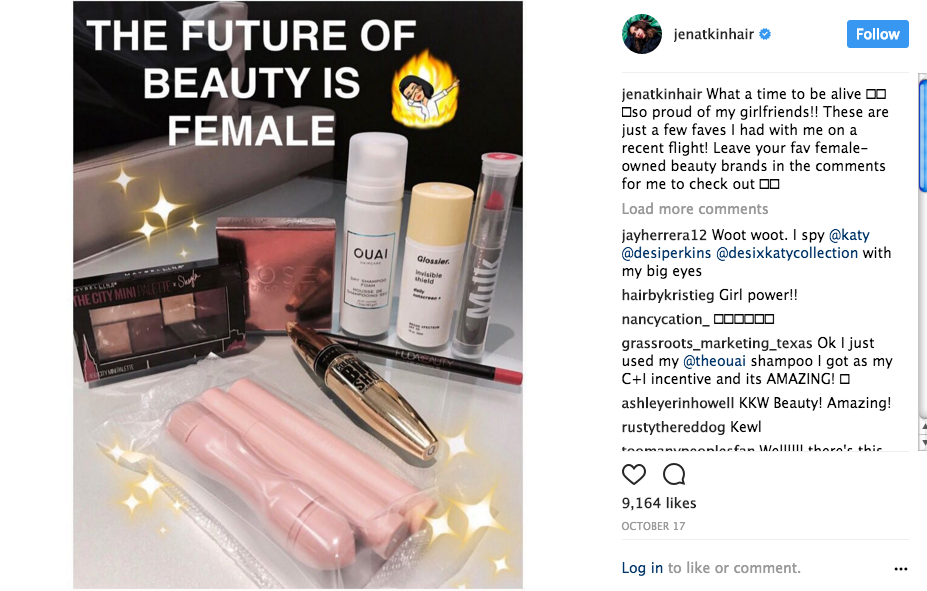 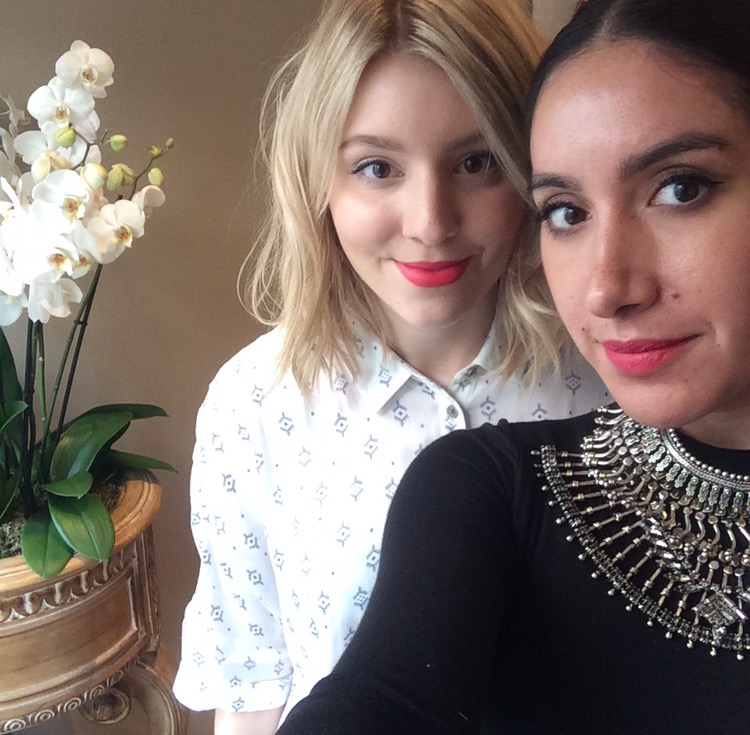 I once interviewed Jen Atkin, shortly before she hit the level of superstardom she is at now. She was still pretty well-known, but more to industry insiders rather than more publicly like she is now. To many she is known as the Kardashian’s go-to hairstylist, but to me she is a ballsy, kickass entrepreneur who has worked her butt off to get where she is today. When I interviewed her, she was incredibly kind, warm and funny, and clearly very passionate about what she does, particularly when it came down to discussing her brand OUAI. Jen also gave me my first Snapchat experience; as I cluelessly stood still expecting a picture, she filmed us both and talked to her many followers about our interview. See, I told you it was a long time ago…

Rose-Marie, of organic brand RMS (her initials) has been a makeup artist her whole life, working with the likes of Miranda Kerr and the Victoria’s Secret lot. When she fell ill years ago, she was told the beauty products she had been using, with their high amount of toxins, could in part be to blame. She responded by creating her own brand, which uses the highest quality organic ingredients and is committed to being clean. Not only do I love her for this, but I admire her because she is one hell of a character in an industry that sometimes takes itself a little too seriously. I recently went to a training session to learn about Rose-Marie’s brand, and I found her to be one of the most charismatic, hilarious and inspiring women I’ve met in beauty. She is clearly insanely passionate about what she does, but she has the most amazing sense of humour and doesn’t take herself too seriously. When I chatted with her after our session, she slyly slipped me one of her new lipsticks that wasn’t out yet, while simultaneously asking me; ‘Do you think I took my jokes too far in that training?’ My answer? Absolutely not. Never change, RMS, never change…

Where do I even start when it comes to Jo? From building and selling her Jo Malone London empire, to overcoming a serious illness and having the courage to take a second shot at the industry with Jo Loves, she’s a force to be reckoned with. I interviewed her back when her book was released, and she was so incredibly inspiring; a true champion of female entrepreneurs and someone that encourages you to shoot for the stars even if the odds aren’t in your favour. She is kind, generous and definitely the classiest lady in the ‘biz.

Proving age is just a number, Linda founded her innovative luxury brand Rodin olio lusso when she was nearing 60. Best known in her earlier days for being a fashion stylist, Linda never intended to start a business in beauty, and just began by making oils for herself and her friends. She actually had to be coaxed into selling them, initially unsure if it was the right path for her. That was in 2007, and now 10 years on, Linda has recently decided to step down from Rodin oilio lusso, but leaves an iconic legacy behind her. Her products are chic, luxe and beautifully packaged – a true representation of the woman herself. Nearing 70, Linda’s still a supercool style icon, rarely seen without a bright lipstick on her lips and her cute grey poodle Winks by her side. It would be a dream to meet her! 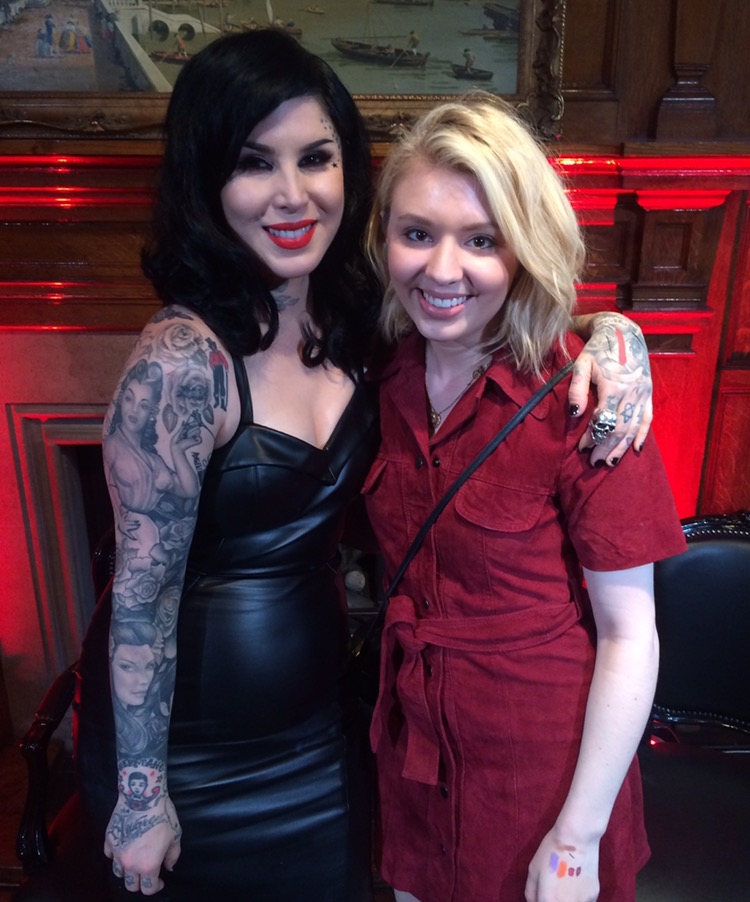 I’ve actually heard mixed things about Kat, but when I met her, she was magic. Passionate and sweet, we chatted for ages about tattoos, her inspirations and her makeup line. What I admire most about her is her commitment to cruelty-free beauty; she is outspoken about her hatred of animal testing. And her products are of course fantastic. She spotted a real gap in the market for heavy-duty formulas with long wear and bolder than bold shades and absolutely nailed it.

She’s smart, savvy and a true entrepreneur; and as the founder of Glossier, right now she must be laughing. Having just successfully launched her buzzing brand over in the UK, Glossier is pretty much all anyone can talk about in the ‘biz. Emily defines what it is to be a 21st century modern beauty businesswoman, having successfully spotted a gap in the market and managed to create a line of beauty products that speak to millennial women on so many levels. And when you listen to her talk in interviews, she’s confident, eloquent and exudes passion for what she does. I saw her in the flesh when I attended the UK launch of Glossier, but got myself in such a fangirl fluster that I couldn’t bring myself to approach her. Now I wish I did, as she is up there in the list of my true beauty idols!